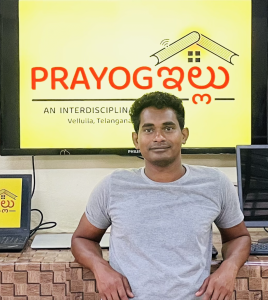 I announced the Gift Culture performance in the village two weeks before it was set to start. The villagers were so excited to take part in this forgotten tradition to rewind old memories/nostalgia with these objects. Married couples and any two people who would like registered their names at Prayogillu for this performance. During that time, two married couples visited Prayogillu from Gujarat in the western part of India. They were also excited to experience this intercultural performance. In all, there were ten pairs (9 married couples and two people) who participated. 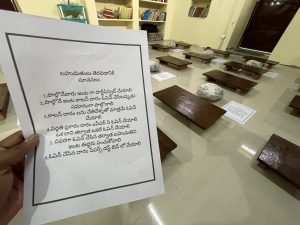 I used the forgotten tradition of “gift culture” that used to be a common practice in village marriages in Telangana State, India, to create a social dialogue between a married couple/two people. In the villages of Telangana, newly married couples are presented with a unique gift. This gift challenges the couple because it is wrapped in many layers of newspapers and tied with cotton threads. This was an endurance performance for the two people involved who had the goal of breaking the threads with only their fingers. Eventually, the couple found a surprise gift inside. The meaning of the gift is many-layered just like the wrapping that surrounds it. The meaning is sharing, caring, and living together even through obstacles, hardships, and pain.

I wanted to expand on this forgotten traditional gift culture and open it up for wider audiences to experience. Therefore, I invited any two people and/or couples in the village of Vellulla to open these gifts regardless of their color, race, gender, or ethnicity. Every package had a gift inside. Both people shared the gift equally. There were some instructions which helped participants to take part in the performance. In this way, the performative gift object opened social dialogue and built relations between the married couple/two people. Ten gifts were placed at Prayogillu as part of the installation. At the time, there were 10 pairs of people who engaged in this performance to create social dialogue.

Instructions to open the gifts:

The Graduate Student International Summer Research or Residency Award was necessary for me to carry out this performance in the place of its origin. I am grateful to have been a recipient of this award. 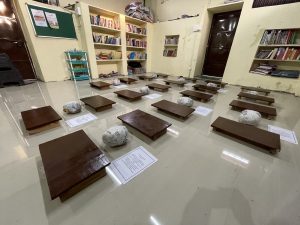 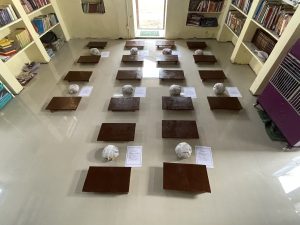